Jenny Owens is a Set and Production designer based in Dublin. She graduated in 2019 from the BA (hons) in Production design for Stage and Screen at the Dun Laoghaire Institute of Art, Design and Technology. Jenny has worked in both feature length and short film, theatre, opera, advertising and music videos, with a keen… Read more »

Heather is a Costume Designer based in Dublin, and trained in Costume Design for Stage and Screen at IADT. She graduated with First Class Honours and received the Student of the Year Award for the Department of Design + Visual Arts. She also trained in the Gaiety School of Acting studying Performance and Advanced Performance. … Read more »

Julie moved from Ireland to complete an MA in Scenic Art at the Bristol Old Vic Theatre School  in 2018, and has since worked on productions of ‘The Snow Queen’ designed by Lez Brotherston,  ‘No Petrol for Twelve Miles’ designed by Ed Thomas and completed placements at the Royal Shakespeare Company, and The Lyceum Edinburgh, on… Read more »

Lisa is one of the first graduates of the Lir Academy’s MFA in Stage Design. She also holds a HND in Technical Theatre from Inchicore CFE, and a Diploma in Speech & Drama from TUD Conservatoire. Recent Set and Costume Designs include IN OUR VEINS (Abbey Theatre/Bitter Like A Lemon), GRIMM TALES, and BAROQUE OPERA… Read more »

Colin is a Lighting Designer from Co. Wexford, now based in Dublin. He completed his MFA in Stage Design (Lighting and Dramaturgy) at the Lir Academy in 2019. During his studies, Colin worked as an assistant lighting designer under Stephen Dodd and Sarah Jane Shiels, and he has also recently worked on projects with Brokentalkers… Read more »

Blue Hanley completed her MFA in Stage Design (Lighting Design and Dramaturgy) at The Lir Academy, Trinity College Dublin, 2019. Within The Lir she designed Homos, or Everyone in America, coinciding with Stonewall50; The Brain, Dark Matter and Dublin’s Memory Station. During this time she also designed WAKE, The Waterboys national tour, and toured as Chief LX/relighter for My Dad’s Blind. She also programs… Read more » 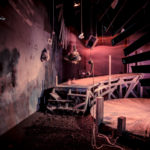 Florentina is a Dublin based Set and Costume Designer, who graduated with a MFA in Stage Design from The Lir Acdemy, Trinity College. During her training, she worked on projects under the mentorship of Joe Vaněk and Monica Frawley. She has also worked as Design Assistant with companies such as Rough Magic (The Portrait of… Read more »